It’s not that Wolves haven’t had their moments in the past 30 years. Indeed, they even reached an FA Cup semi-final 21 years ago, where they faced Arsenal at their peak. Yet in those days defeat felt inevitable.

The reality has been adversity with occasional glimmers of hope. Yet this feels quite different. At a cacophonous Molineux that invoked glory days, they progressed into another FA Cup semi-final, dispatching Ole Gunnar Solskjaer’s revived Manchester United with quite efficiency. A late Marcus Rashford goal couldn’t disguise the fact they were well beaten, the striker turning in Luke shaw’s cross in the fourth minute of added time.

The charm which has the surrounded the Norwegian until now had dissipated in the last week, with two defeats. 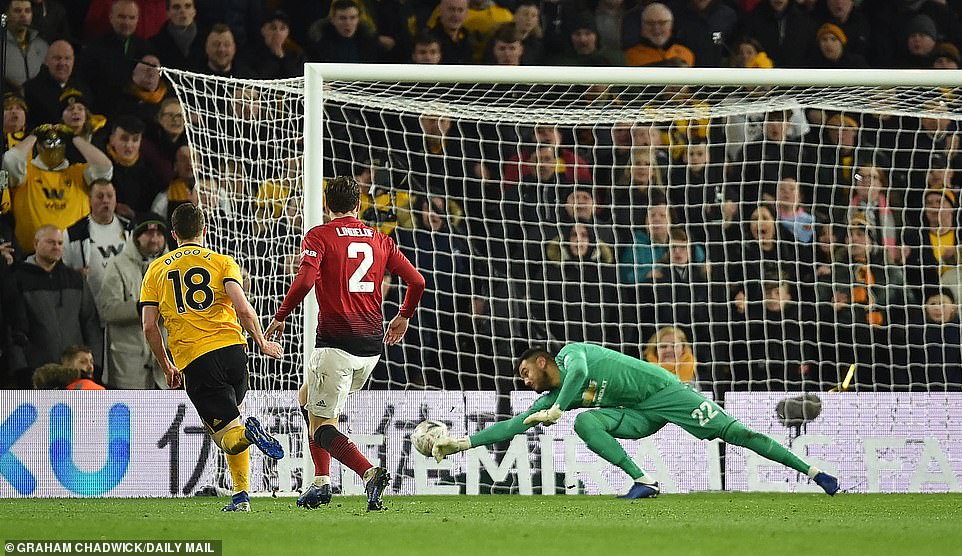 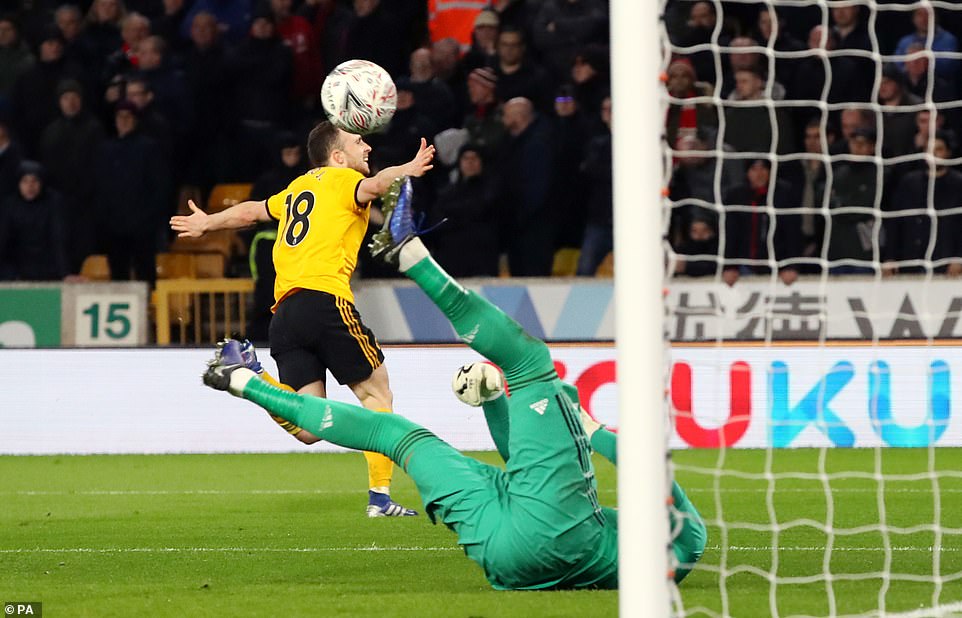 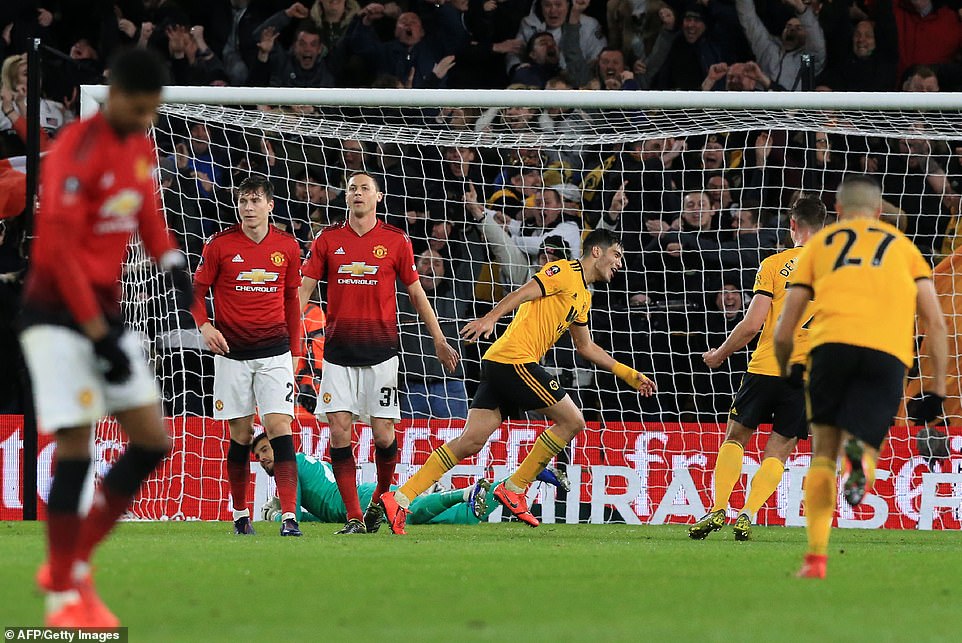 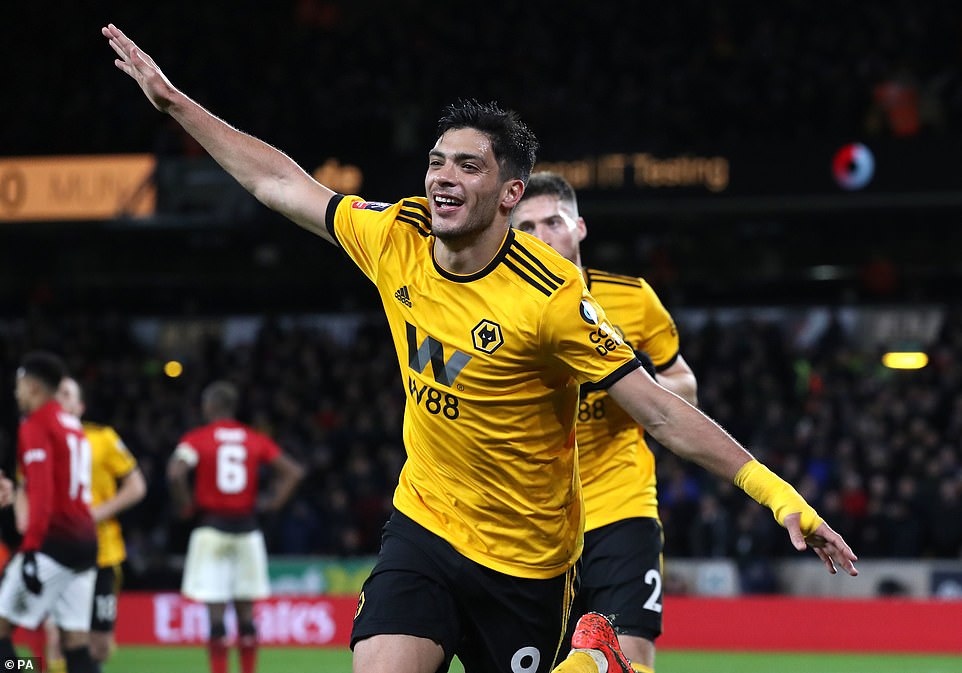 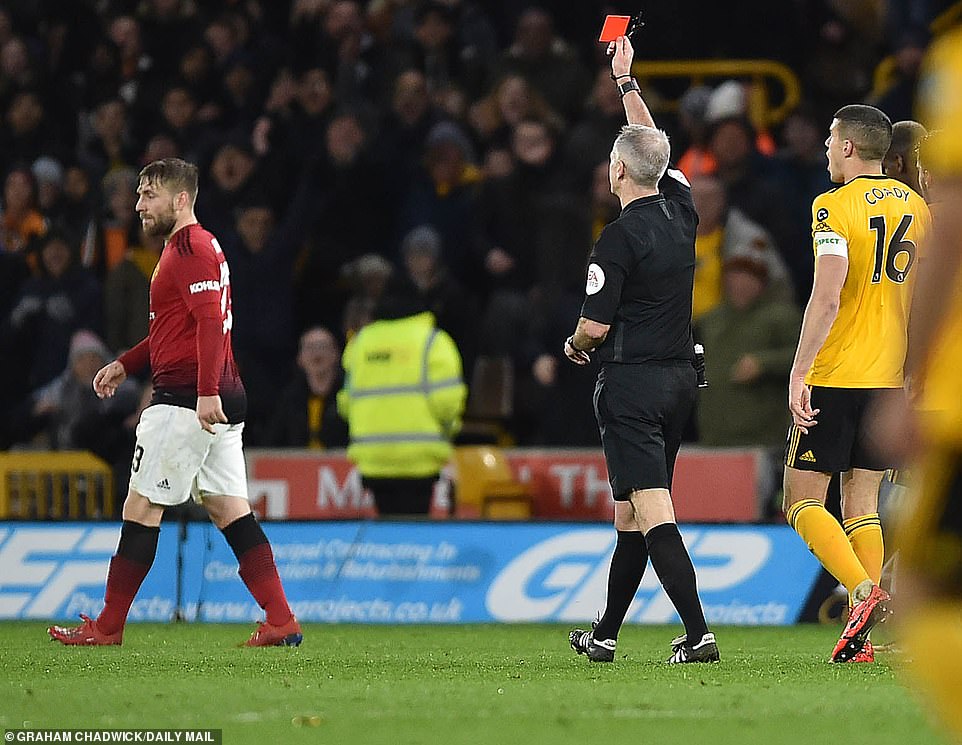 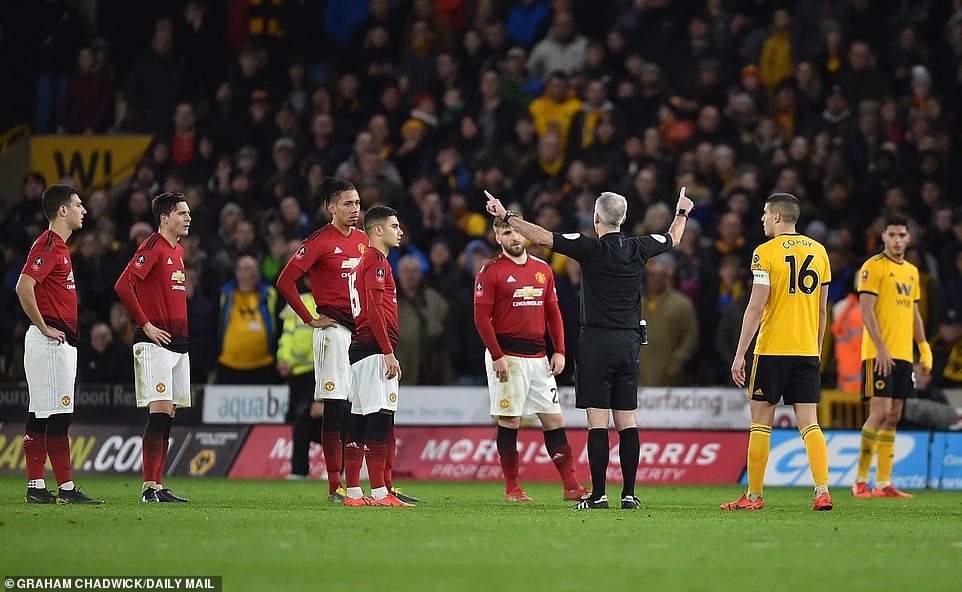 This was their only genuine chance of a trophy this season. Yet when Wolves moved up a gear in the second half, they had no response. With Joao Moutinho and Raul Jimenez outstanding, they swept past United. Empowered by their Chinese owners Fosun, another giant of English football is stirring.

This raucous night under lights made you imagine what it must have been like to watch Wolves in their prime, Billy Wright and all, taking on Honved in the 1950s. They have now seen off Liverpool, Tottenham, Chelsea and United this season. As United found on Sunday night, they are the genuine emerging force of English football.

Just to underscore that the old order has been overturned for good, Paul Pogba was handed the armband. He has been given that honour by Jose Mourinho, then stripped of it, humiliatingly. Now he was restored to centre stage and this was the first time, with neither Ashley Young nor David de Gea picked, that he has led the team out since his demotion. 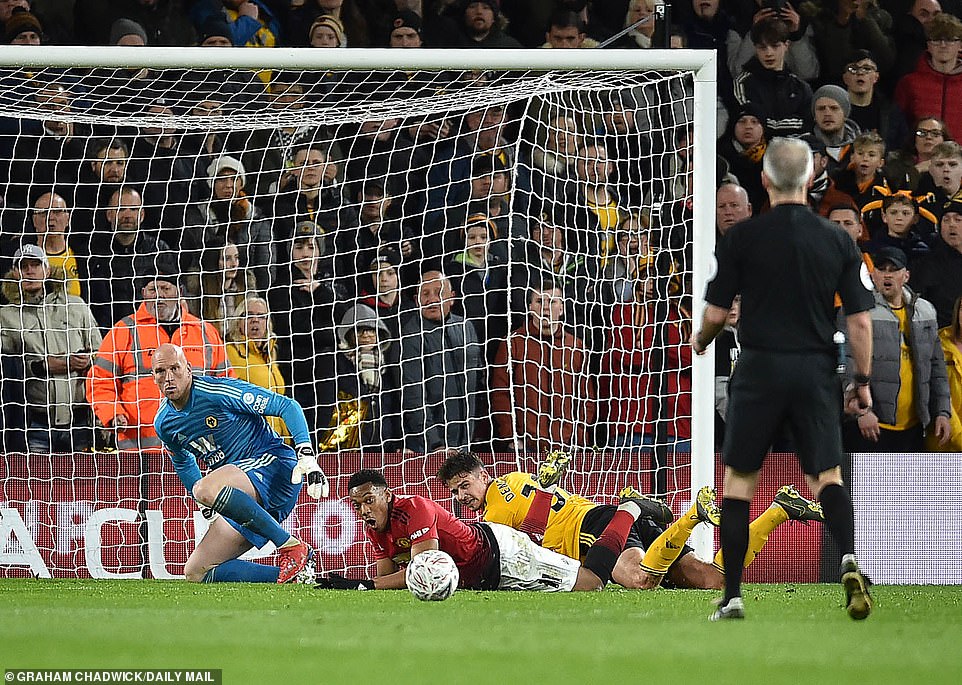 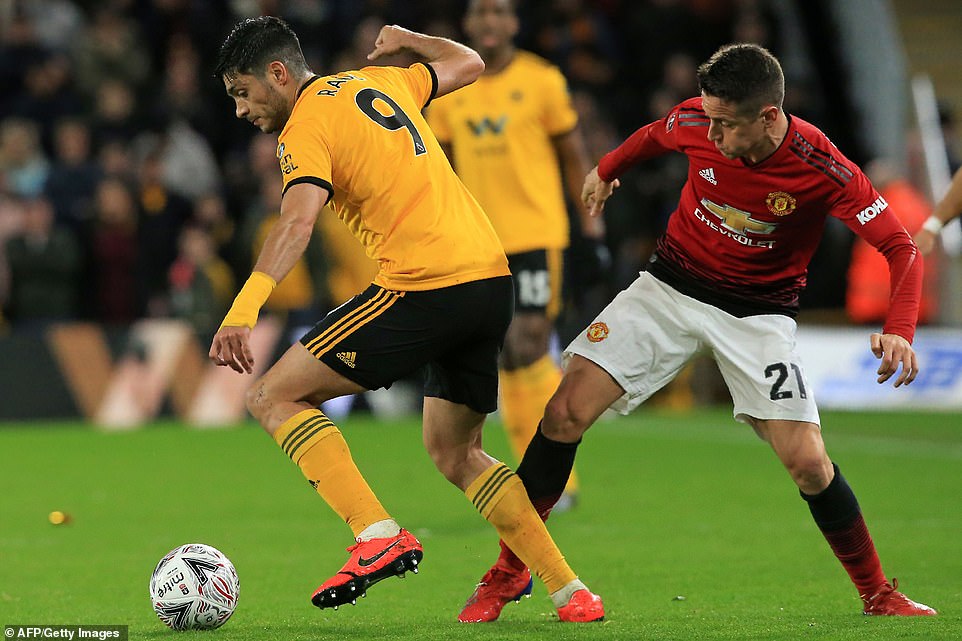 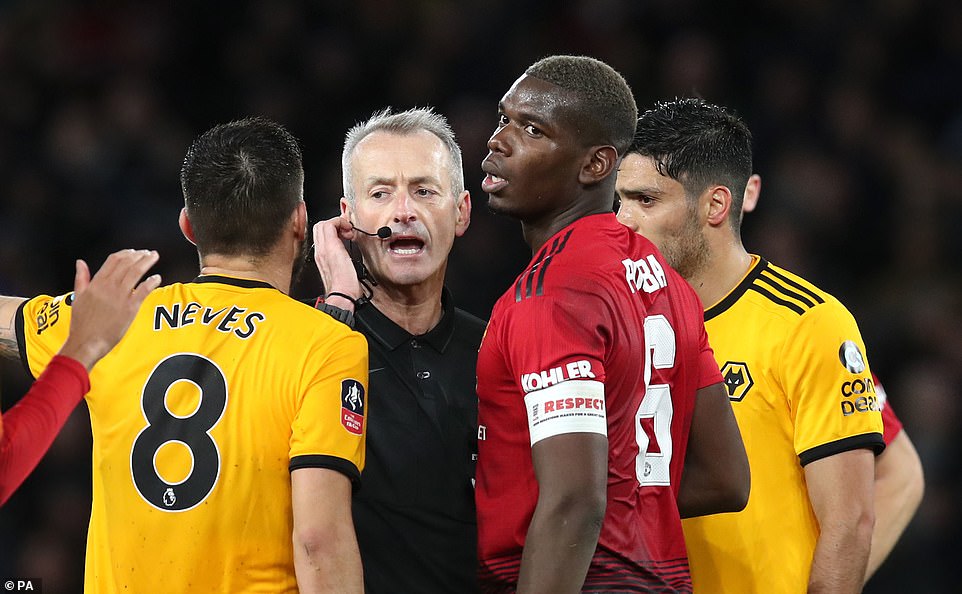 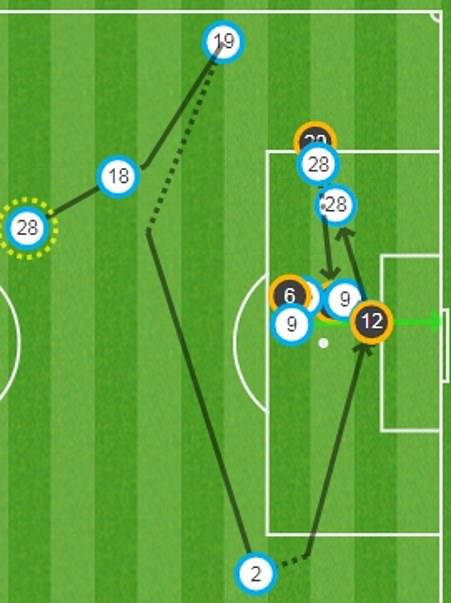 Raul Jimenez opened the scoring for the home side in the 70th minute.

Yet both managers had their eyes on the famous old trophy. The only significant changes were the goalkeepers. Otherwise Nuno Santo stuck to his best starting eleven. And Ole Gunnar Solskjaer’s changes were largely tactical or enforced: Diogo Dalot for Young, Ander Herrera for Fred and Anthony Martial for Romelu Lukaku.

The Molineux atmosphere also suggested that the four-time FA Cup winners, their last triumph coming in 1960, carved some silverware. A healthy United contingent and the late kick off combined to make this a raucous occasion.

Yet the early exchanges were absorbing rather than thrilling. Solskjaer reverted to his first formation of 4-3-3, with Pogba playing the advanced midfield role behind a front three of Martial, Marcus Rashford and Jesse Lingard. They probed, with Rashford’s movement impressive, always looking to get in behind Wolverhampton’s back three. 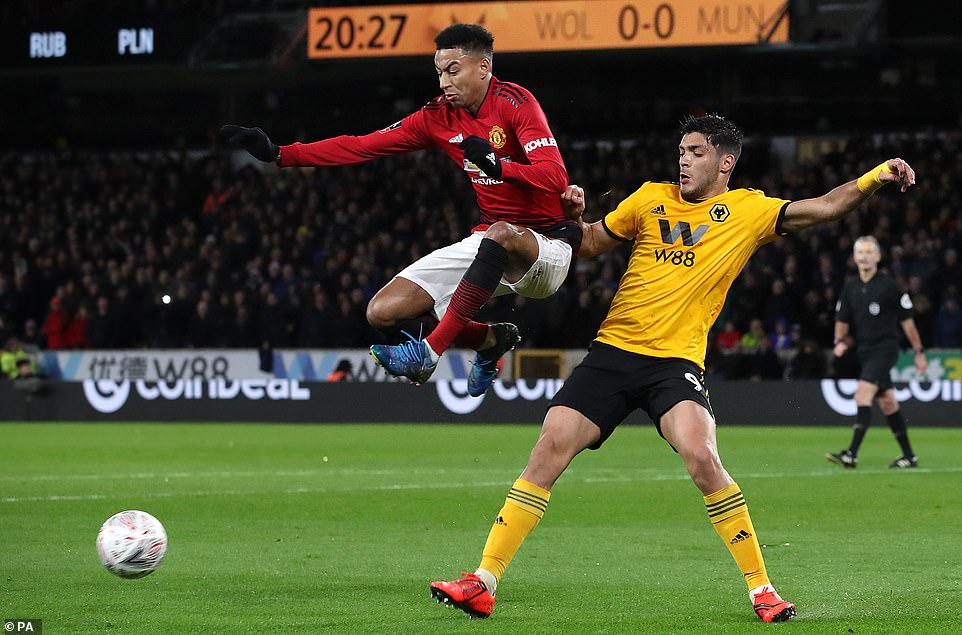 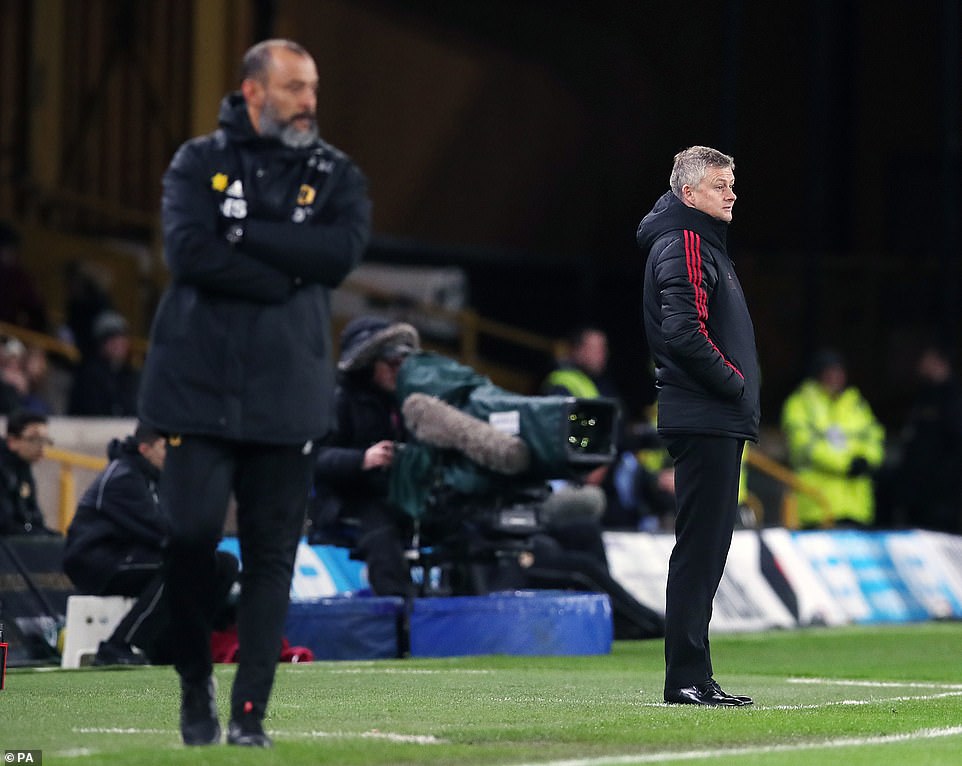 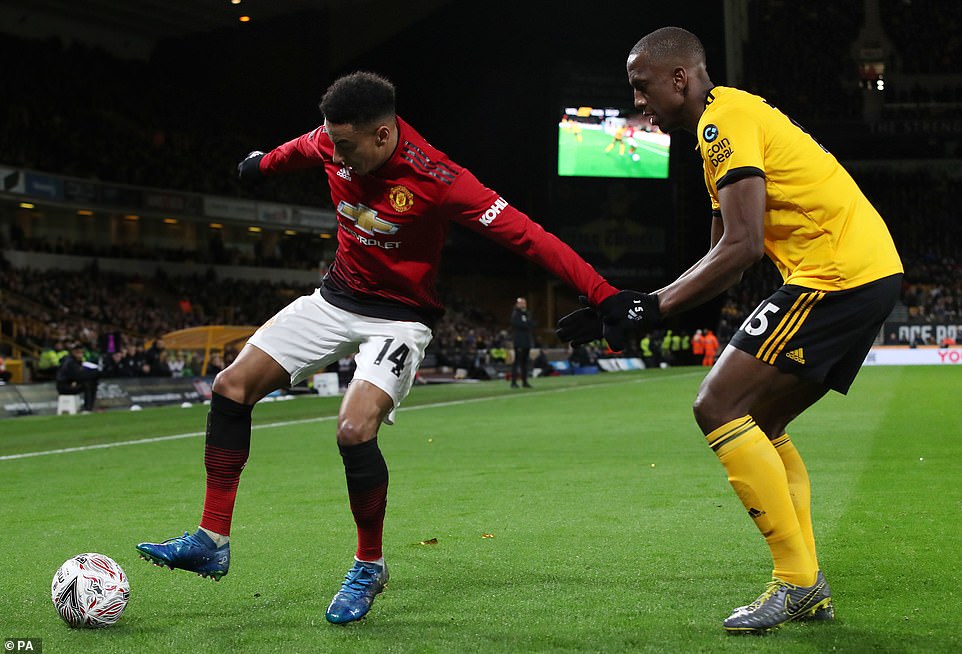 Yet Nuno’s team are too well organised to concede much. They allowed United possession drew them on and bided their time. But a Pogba strike wide and a Rashford shot from 30 yards is all they really produced in that opening quarter, despite the intricacy of their passing.

Wolves would have their moments. Matt Doherty’s cross for Diogo Jota, which saw the striker stretch out a leg and force a save from Sergio Romero served warning that more was to come. Then a flurry of VAR issues livened up proceedings.

Wolves claim came from a 36th minute Joao Moutinho corner, with Chris Smalling bundling into the back of Willy Boly and Leander Dendoncker. Smalling did have his arm loosely around Boly, but it seemed a rather normal coming together and referee Martin Atkinson didn’t appear to consult his video assistant. 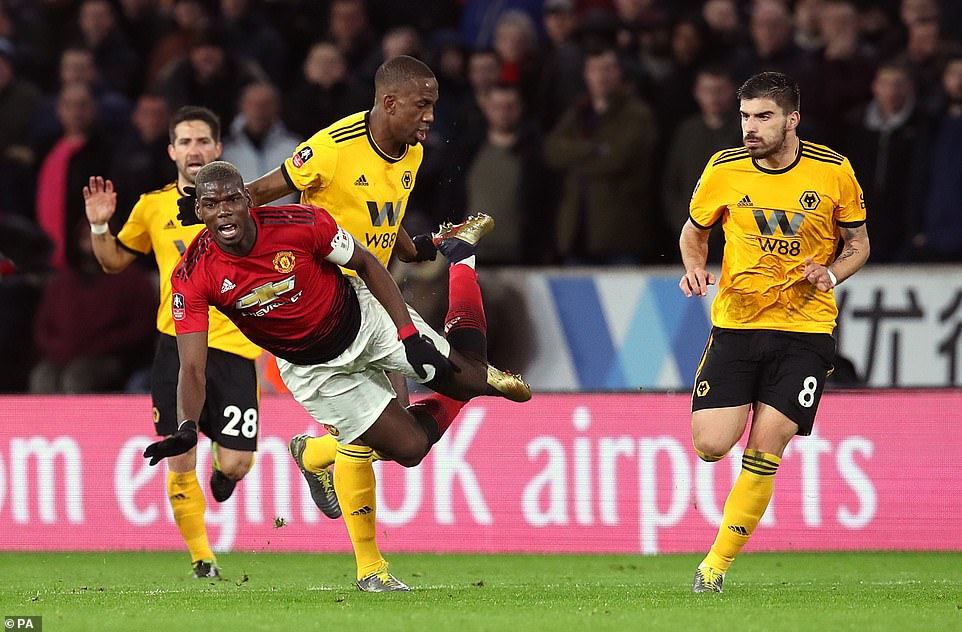 Two minutes later United had their own VAR opportunity, also from a corner. In a Paris re-run, Diogo Dalot shot and Jonny Otto turned his back only for the ball to strike his elbow. The FA allow a more generous interpretation for defenders of the handball rule than UEFA and thus it was never likely to succeed.

Still, United have learned something from their Champions League experience. In Paris only Dalot appealed. Here, six players vociferously demanded a penalty. After a short conversation, Atkinson dismissed them.

From another United corner just before half-time would come the best chance of the half: for Wolves. Catching United on the counter, Wolves advanced the ball to Ruben Neves who threaded it inside Victor Lindelof, trying to hold the fort on his own, for Jota. Credit Romero for swiftly closing the angle by advancing off his line and smothering the ball, but Jota should have scored.

The pattern remained unchanged at the start of the second half. Both teams largely cancelled each other out, though the odd chance did emerge. Those of Rashford on 47 minutes and Neves on 50 minutes, a long-range strike, were wildly wide. 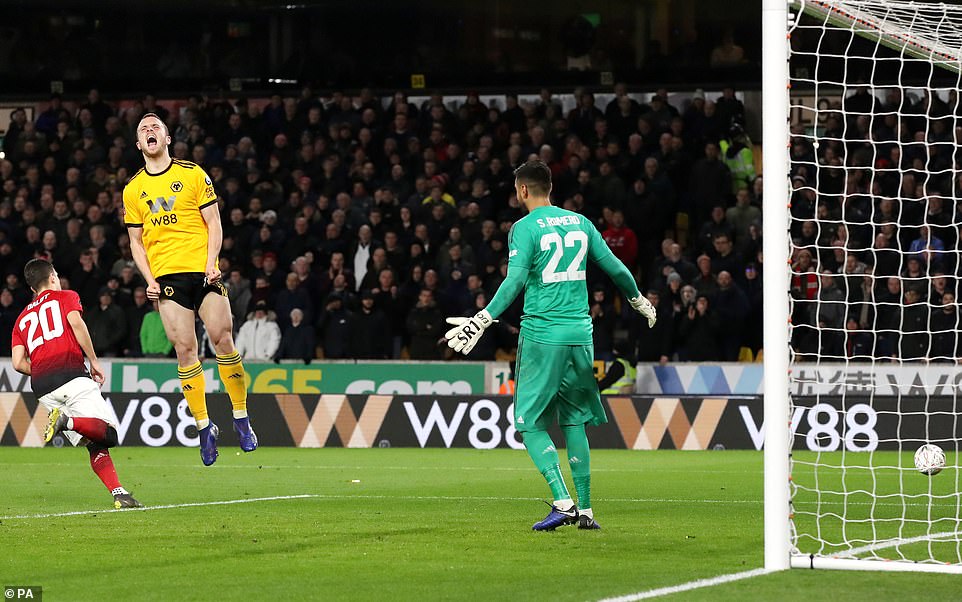 Yet the 54th minute Moutinho corner brought the best moment of the match. The lovely floated corner was met with impressive force by the head of Jimenez. It looked inevitably destined for the goal until Romero leapt to his left, raised a hand and managed, despite its force, to lift it over.

Wolves though were encouraged. They scented blood, more so when Neves delightful curled pass fell just short of Jimenez a minute later. And then when Moutinho found space to open up and curl a shot from 20 yards, United were grateful again to Romero, diving to his left to touch the ball over the bar.

United were temporarily on the back foot, just surviving a precarious 10 minutes. With Herrera, Rashford and Matic all on yellow cards, they could ill afford any mistake. Rashford and Lingard continued to attempt to make runs to relive the pressure the reality was the Neves and Moutinho had established midfield superiority. The difficulty was making it count. 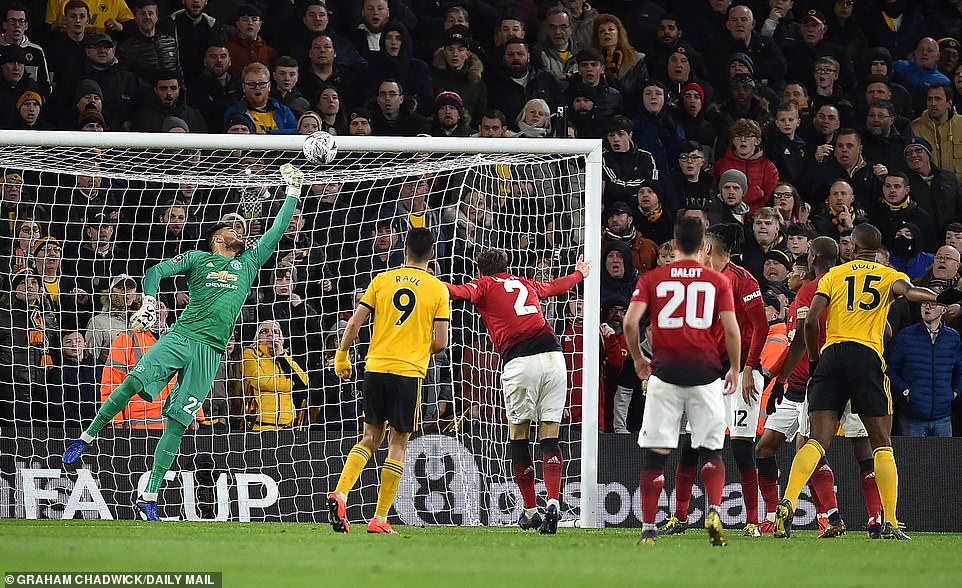 The South Bank roared for a penalty on 69 minutes when Dendoncker ran into the back of Herrera but that was optimistic. Still, they would have to wait long for something genuine to cheer.

Wolves were stretching United, switching play from side to side when Moutinho, who had been excellent throughout drove into the United box. In one run, he took out three United players and drilled the ball into Jimenez.

Despite the fact that Lindelof blocked his first strike and that there appeared to be three defenders around in, the Mexican managed to swivel round, connect again and strike past Romero, who on this occasion could barely see from whence the ball came. It was an extraordinarily sloppy goal to concede and yet well deserved for Wolves.

Worse was to come for United in terms of defending. As they threw men forward to attack – Andreas Pereira was on for Herrera – Wolves countered on them, hooking the ball out for Jota. Luke Shaw was the last line of resistance and though initially he seemed he have the situation under control, Jota’s desire and aggression simply saw him get the better of the left back, leaving him on the floor. Now he advanced on goal and Lindelof rushed back to attempt to block him. But he got his shot away, Romero, for once, reacted late and slow, and it crept in past him.