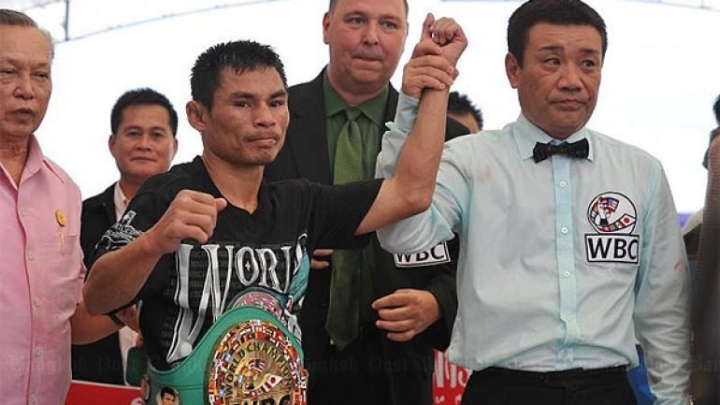 It will be the 11th attempted defence of the title he won in 2014 with a stoppage of Oswaldo Novoa.

As has been the trend since Menayothin moved past the 49-0 mark, another win will at least register some social media reaction among hard core fight followers.

Most of it will be about needling Floyd Mayweather fans more than anything having to do with Menayothin versus Tatsuya Fukuhara (21-6-6, 7 KO).

It’s at least a reason to notice.

There aren’t always a lot of those outside regional markets the smallest champions call home.

The way competition plays out can preclude much international interest. There are times when that is less true.

Roman Gonzalez began the groundswell of interest in his career at 105 lbs. Japan’s Kazuto Ioka and Puerto Rico’s Ivan Calderon built followings from there as well.

Any fighter with more than fifty wins, no losses, and double-digit title defences in their weight class should be at least inching their way towards Hall of Fame consideration.

That was true for the great Ricardo Lopez well before he started to get the broader attention his talents deserved later in his career.

Even devout followers of the lower weight classes would struggle to make a case for Menayothin. If he were managed towards the sort of finish in the division Lopez had, perhaps that could change.

Lopez racked up defences for years, and was recognized as special along the way, but then he won a pair of unification bouts towards the end of his reign to ice his time in the class. It was a punctuation mark on his tenure before a short epilogue at 108 lbs.

It was additional substance to the numbers Lopez accumulated in a 51-0-1 professional career.

Menayothin will be going for number 53 against a fighter he already beat in 2017. Menayothin could probably get to 70-0 with the right mix of Fukuhara’s and non-title stay busy action. It won’t fill in the substance currently lacking.

It could get more interesting soon. Former WBA titlist Simphiwe Khonco is the leading contender for the WBC and hasn’t lost since a decision to Hekkie Budler in 2015.

However, Khonco doesn’t fight outside South Africa and holds an IBO belt he can defend there.

That would leave Melvin Jerusalem as the next available contender. Jerusalem gave Menayothin a very good fight, losing a narrow decision in 2017.

Those would be good but, at 52 and likely soon 53-0, wouldn’t it be more interesting to find out how much those numbers mean?

What if Menayothin were matched with fellow Thai titlist Knockout CP Freshmart (19-0, 7 KO). Freshmart is only 28, has held some version of the WBA belt since 2014.

All-Thai unification isn’t a common occurrence but, given the standout statistics of Menayothin, maybe the boxing gods could smile on an exception to the rule?

The answer is probably not.

In boxing in general, and the lightest classes more so, the financial incentive is rarely strong enough to compel fighters or their teams to risk critical real estate. Unification still remains relatively rare.

Five fighters currently hold more than one belt in five of the sport’s 17 weight divisions. None, as of recently with career decisions from cruiserweight king Oleksandr Usyk, hold all four in any one class.

From the outside looking in, it’s easy to wonder if the competitive desire of a long reigning champion to find out how good they really are will rise above the hard-hat approach to a hard living.

The reality is that probably isn’t even the right question.

Regardless, an undefeated champion in boxing with the number of wins Menayothin has somehow falls below the radar of even many who pay attention to strawweights. 53 wins without a loss is great but the answer to ‘against who’ is why lots of readers here might skip right past this headline.

It would be nice if Menayothin got a chance to close the show in style and give everyone a reason to notice.