Neil Warnock vented his anger on the standard of officiating in the Premier League after Chelsea defeated Cardiff in hugely controversial circumstances, leaving the Welsh club five points adrift of safety and nursing a simmering sense of injustice. César Azpilicueta was a yard offside when he headed an equaliser six minutes from time, prompting Warnock to say the Premier League had the “worst officials” and matches were being decided by “who you get in the middle and who has a flag”. 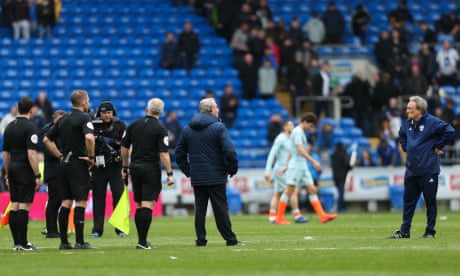 Ruben Loftus-Cheek grabbed an injury-time winner to compound Cardiff’s misery, although the main talking point for Warnock, and the moment on which the game turned, was Azpilicueta’s goal. Eddie Smart, the assistant referee at that end of the pitch, is understood to have had his view blocked by Willian, who delivered the cross that Marcos Alonso glanced on for Azpilicueta to nod past Neil Etheridge. Television replays showed there was clear daylight between Azpilicueta and the nearest Cardiff defender.

“If anyone was in doubt before today, VAR has to be the answer to help them out,” Warnock, Cardiff’s manager, said. “They [the officials] need help, don’t they? It would have sorted the goal out in 10 seconds. We’ve worked on things for the last three weeks, one of them coming out at corner kicks. So the lads have said: ‘What do we do now, gaffer? What’s the point?’ It’s soul-destroying, really. We played so well but the lads are all down, flat as a witch’s whatever.”

Warnock needed time to calm down before giving his first post-match interview, with his anger and exasperation there for all to see when the final whistle was blown. He walked towards the centre circle at the end of the game and stared at Craig Pawson and the two assistants before they left the pitch.

“We worked three weeks for this but to get let down by decisions … no major decisions went for us,” said Warnock, who also felt Cardiff were denied two clear penalties for fouls on Sean Morrison and said that Pawson should have dismissed Antonio Rüdiger for a professional foul on Kenneth Zohore.

“If I was a Burnley or a Brighton fan [two of Cardiff’s relegation rivals], they will be absolutely loving it today. It’s not our fault an official can’t see that, it is the most obvious offside I have ever seen or the most certain penalty I have ever seen. It’s the best league in the world but the worst officials. They don’t understand what is at stake. They shouldn’t make mistakes at this level.”

Warnock revealed he had spoken to the officials in their dressing room. “I listened to what they said. They’re all honest guys, aren’t they? They’re as disappointed as me, really. But it doesn’t have the same effect on them as it does me. We’d have been two points behind the others if we’d beatenChelsea. He [the assistant referee] is saying Willian blocked his view but it wasn’t a six-inches one. Either side, you should have been able to see he’s two yards offside.”

Asked about the other contentious moments in the game, Warnock said: “There was a penalty shout on Morrison in the first half. The second half, 53rd minute, Rüdiger has pulled Morrison’s shirt back, and the ref’s in a really good position. It’s almost like not a matter of who you play, but who you get in the middle and who has a flag. It’s all right making genuine mistakes but, at this level, it shouldn’t happen. Not when you put so much into a game. It’s a sickener.”