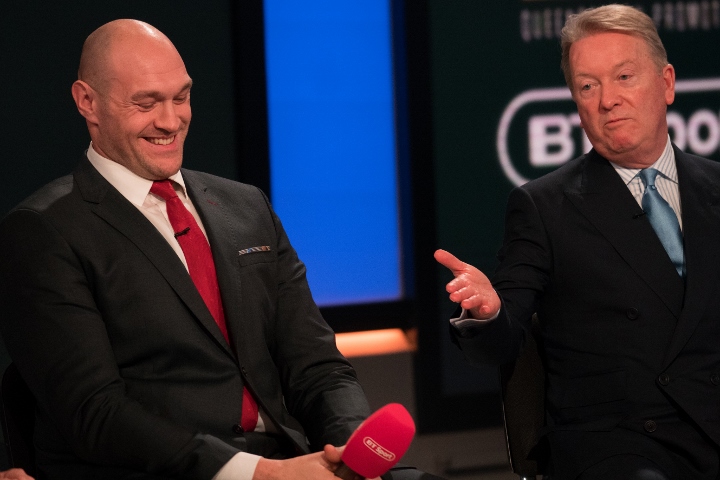 TYSON FURY HAS stolen a march on his heavyweight rivals and is in prime position to crack the American market after signing his US broadcast deal with ESPN, by far the biggest sporting network Stateside.

It is a landmark deal for the rejuvenated Tyson following on from his stunning resurrection against Deontay Wilder in December, where he proved that he remains the main man to be reckoned with amongst the heavy mob.

He has now got an incredible platform to showcase his talents in the US along with the continuation of his broadcast partnership with BT Sport in the UK.

I am aware of a negative reaction from some quarters to this development but, believe me, major broadcasters do not stump up huge sums of money for big fights not to happen.

You have to put this move into a realistic perspective. Anthony Joshua has broadcast partners on both sides of the Atlantic in DAZN and Sky Sports, Deontay Wilder is aligned with Showtime, with the PBC also having a deal over here with ITV and DAZN tied in with Sky.

So is Tyson supposed to sit in the middle and not make the money his accomplishments deserve? As well as always being the away fighter when the big fights come around.

The bottom line of it is that nobody is trying to put a spanner in the works of making the fight with Wilder. Even last night Shelly Finkel (Wilder’s manager) and I were trying to work out a deal.

Negotiations are still very much going on and that is where we are at. Even Deontay has come out and said there are no contractual issues from his side so there should be no problem in making the fight if that is the case.

We are determined to make it because Tyson wants it, Deontay and Shelly want it, so it is up to us to try and get it done and we will work hard to do so.

We’ve done a deal that is in the best interests of Tyson and have worked hard at it. Now we won’t be beholden to other people.

Now ourselves and Tyson will be in the driving seat promotionally and our young fighters will also get the chance to fight to broaden their experience on the undercards.

ESPN – with millions of customers on their ESPN+ streaming service and watched in 85 million homes in America – is the premier platform in the US and this move will make Tyson an even bigger noise over there after the huge impression he made last time around.

Tyson, who is in a fantastic place both physically and mentally, wants to keep busy and is looking after his long-term fighting future. That he is looking at the long-term can only be good news for the fans.