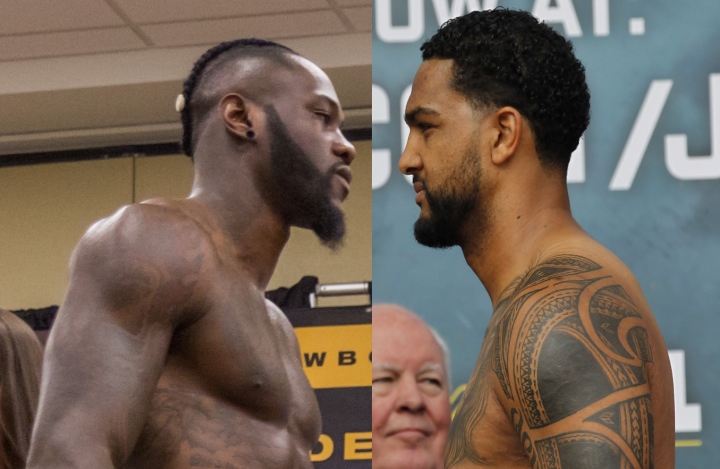 At some point, the World Boxing Council (WBC) will get a desired heavyweight title fight.

Barely a week after plans for an ordered rematch between Deontay Wilder and Tyson Fury were officially torched, the WBC has now summoned Wilder – its heavyweight champion—to next defend versus mandatory challenger Dominic Breazeale.

The bout was formally ordered by the sanctioning body on Wednesday, with the two sides given 30 days to negotiate a deal.

A purse bid hearing has been set aside for April 4 in Mexico City in the event that the two sides cannot come to terms within the designated time frame.

Sources with knowledge of existing talks have previously informed BoxingScene.com of such a bout being planned for the springtime, with May 18 at Brooklyn’s Barclays Center as the likely date and venue.

Of course, the same formula was once applied to what was thought to be a finalized deal for Wilder-Fury II. The pair of unbeaten heavyweights fought to a disputed 12-round draw last December in Los Angeles, with talks of a rematch occurring almost immediately after the conclusion of their Showtime Pay-Per-View headliner.

Plans of a sequel came with the blessing of the WBC, who eventually ordered such a fight once it was clear that both sides needed a nudge in order to cross the finish line. Two separate purse bid hearings were postponed, with a final resolution date of February 26 assigned in order to come to terms.

The latter date came about only after Fury (27-0-1, 19KOs) and promoter Frank Warren dropped a bombshell, announcing on February 18 that they’ve entered a co-promotional pact with Top Rank and for the unbeaten Brit to fight exclusively on ESPN in the U.S. and BT Sport in the United Kingdom.

Wilder (40-0-1, 39KOs), through his longtime adviser Al Haymon, fights under the Premier Boxing Champions (PBC) banner which does business exclusively with Showtime and Fox Sports. Its UK model is now primarily carried by ITV.

Fury and his team informed the WBC in late February of their intention to instead pursue a stay-busy fight in lieu of a straightaway rematch with Wilder. The news opened the door for Breazeale (22-1, 20KOs) to enter the title picture, having served as the mandatory challenger since a Nov. ’17 knockout win over Eric Molina in their title eliminator.

On that same card, Wilder scored a 1st round knockout of Bermane Stiverne, whom he previously outpointed to begin his title reign in Jan. ’15. The rematch marked the second time in as many fights in 2017 where Wilder and Breazeale fought on the same show.

The prior instance helped ignite a feud that remains as strong as ever more than two years later. Sometime after Wilder and Breazeale scored knockout wins on the same Feb. ’17 Fox-televised show in Wilder’s Alabama homestate, a brawl erupted between their respective camps in the lobby of a Westin hotel in downtown Birmingham.

Breazeale went as far as to file a lawsuit against Wilder and his team, only for the case to be dismissed by a California judge. Two years later—and months after his knockout win over Carlos Negron in his most recent bout last December—the California-based heavyweight contender finally gets to have his say in the ring.

Once again, the WBC remains involved in hopes of getting Wilder in the ring.

“This order constitutes the start of the free negotiations period for Champion Wilder’s mandatory defense of his title,” notes Sulaiman.

“If no agreement is reached between the camps, the WBC shall conduct a purse offer ceremony on April 4, 2019 at the WBC Offices in Mexico City, Mexico.”