We only want Spence – Crawford trainer

It was openly voiced by Crawford’s promoter Bob Arum, his head trainer Brian “BoMac” McIntyre, and Crawford himself – they want Spence next.

At the post fight presser, McIntyre made it known, its Spence or “sh*t.”

“I don’t see why the fight can’t happen,” McIntyre told BoxingScene.com. “I don’t see any other alternative. Who else is there to fight out there? There’s nobody else to fight. Come on Spence come out the closet. We want Spence. You see what we did to [Khan]” 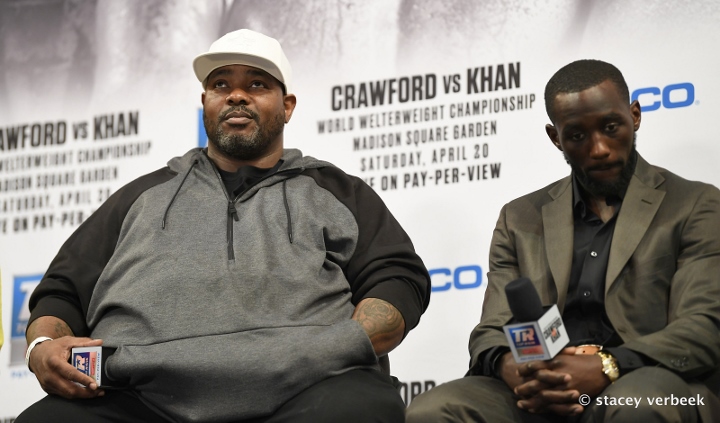 The man they call “BoMac” instituted a strategy to have Crawford start quicker and implement the southpaw stance to make Khan feel uncomfortable.

“We worked a lot in camp about coming out fast and quick,” McIntyre said.

One strategy that the worked in camp was to get Khan to move because according to McIntyre once Khan was moving his punch output became less and less and made him open to the counter.

“We wanted to make him lose his feet,” explained McIntyre.  “Once he moves his feet he really don’t punch so we could time him better. So once we were on him and his feet were moving, we came out and you saw what happened? When Terence turned southpaw he kept countering and landing the straight left. I ain’t going to tell you anymore of my secrets, I know I’m a great coach.”

Khan was hit with a shot below the belt in the 6th round where his coach Virgil Hunter waived off the fight because he said his fighter could not continue. McIntyre applauded Khan for what he did before the 6th but felt like Khan wanted a way out and got it.

“I take my hat off to Khan because he tried to fight but sh*t he could have took the five minutes. He quit.”