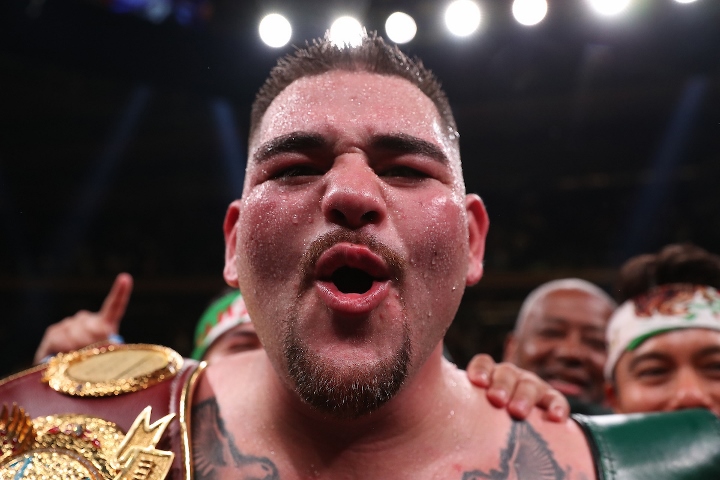 Upon his arrival to Mexico, Andres Ruiz, father of WBO, WBA, IBF, IBO heavyweight world champion Andy Ruiz, discussed the recent shocker that his son pulled off on June 1 – when he stopped Anthony Joshua in a massive upset at Madison Square Garden in New York City.

The elder Ruiz explained that their goal is to sweep the entire weight class – and there is only one more belt remaining, the WBC, which is held by Deontay Wilder.

Both Wilder and Ruiz are managed by Al Haymon and compete under the Premier Boxing Champions banner.

Ruiz dropped Joshua four times before the contest was waved off in the seventh round.

But before he can think about Wilder, both boxers have other obligations lined up.

Joshua has exercised an immediate rematch clause to fight Ruiz in the fall, and Wilder is facing Luis Ortiz in a rematch, also in the fall.

“We already won three belts that night in a fight where nobody had faith is us… only those of us who were part of the team knew that we could win, we always had confidence in taking the titles.

“We just need that one [belt from the World Boxing Council],” said Andrés Ruiz, who was born in Mexicali, Baja California.

Andres Ruiz has no problem with his son taking the rematch with Joshua, because the first time around his son was a late replacement and only had a few weeks to prepare. They expect a much better camp this time around.

“It’s best for Andy, and I do not have the slightest doubt of him winning. For this fight we had little preparation time, because we came in as a replacement, but with more time to prepare we will arrive much better.

“Many can say that they will win, but it is like a snake, you hypnotize them and they do not know what to do in the ring, so [Andy] has beaten everyone and will continue to do so,” Andres Ruiz said.

“In addition to Joshua, there are many opponents for him … there is Wilder, and also there is Tyson Fury, a fight with him would also interest us.

“As I said, the main objective is to conquer all the titles and we only need one more.”