What an appointment with greatness! 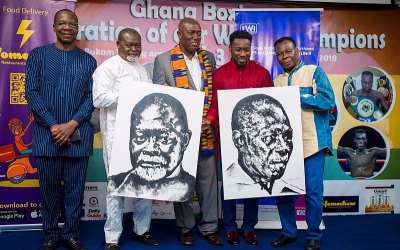 September 17, 2019, was the day His Excellency, the President of the Republic of Ghana, Nana Addo Dankwa Akufo-Addo, stamped his approval on my book, GHANA BOXING: Celebration of Our World Champions, at the Jubilee House, calling it “a great work”.

The President was gracious to spend his precious time with a delegation of World Champions, led by myself, during a courtesy call on His Excellency ahead of the launch of the historic book, scheduled two days, later, at the Bukom Sports Emporium.

Nana Addo praised the World Champions – David Kotei ‘Poison’, Azumah Nelson, Ike Quartey, and Joseph Agbeko – for raising the profile of the country in different time-zones around the globe, over the years.

The President expressed his keen interest in the sport he practised in his youth and promised to look into the possibility of the State owing a financial debt to D. K. Poison.

Nana Addo, therefore, charged the Sports Minister, Isaac Asiamah, to liaise with the Ghana Boxing Authority president, Peter Zwennes, cited by Kotei as his former attorney, in order to establish the necessary paper trail to get to the bottom of that case.

Later, the grateful former World Champions took turns to receive copies of the book endorsed by His Excellency, and took pictures to mark the joyous occasion.

That was the foundation on which the book launch was built like a skyscraper, attracting the heights of pugilistic prowess such as Poison, Azumah Nelson, Nana Yaw Konadu, and a great mix of the cream of society that filled the Conference Room of the Bukom Sports Emporium with their greatness, last Thursday.

Prior to that presidential confab, I had the great privilege of hosting a lunch with D. K. Poison, and Ghana’s sole member of the International Boxing Hall of Fame, Samuel Azumah Nelson. W-o-w!

The lunch also featured Ike ‘Bazooka’ Quartey, the former World Boxing Association welterweight King whom I had served as Publicist in the past, and Joseph Agbeko, the former International Boxing Federation bantamweight Champ.

Roger Barnor, a WBC Referee/ Judge, was also on hand to converse with the legendary quartet during the lunch, characterised by great humour and laughter.

Then, on Thursday, September 19, 2019, on the eve of the 44th anniversary of the mighty David’s conquest of Reuben Olivares, to rule as King of all featherweights in the world, the historic book was launched in Bukom, the hallowed ground of Ghana Boxing!

The greats and mighty of society – and a great number of media folk – graced the occasion, enriched by the precious presence of the iconic D. K. Poison, Azumah Nelson, and the Sunyani-Prodigy, the Marvellous One, Nana Yaw Konadu.

As a foretaste before their arrival, the guests were treated to a screening of clips of the historic showdowns of the World Champions, during which The Barima, The Zoom-Zoom, The Professor Azumah Nelson made his grand entry to great applause, as a harbinger to the Father of all of Ghana’s World Champions.

The distinguished guests rose to their feet to welcome Ghana’s first World Champion, David Kotei Poison, in the company of his grandson, Nasim, led in by myself, to great applause, while the screening continued.

Launching into the book, I took pains to recognize every gym, gym-keeper, trainer, promoter, manager, matchmaker, every fighter who ever put on the gloves and paid tribute to the pioneers of modern boxing, including James Figg, the Father of Modern Boxing, and Jack Broughton, the inventor of the boxing glove.

Love Allotey, the first Ghanaian to ever fight for a World Title in 1963 – he in fact, did fight for both the WBC and WBA titles – reserved his place in the history book, as did his nemesis, Floyd Klutei Robertson, who fought for the World Title, also unsuccessfully, in Accra in 1964.

The book records Poison’s conquest of Reuben Olivares in 1975 to establish his kingdom over all the featherweights in the world.

Ghanaians responded in ecstasy, jubilating over the extraordinary feat, massing up at the airport to greet the returning conquering hero.

That was the seed that bore the harvests of 10 World Champions, including Azumah Nelson, Nana Yaw Konadu, Ike Quartey and Alfred Kotei in the Golden Generation spanning 1984 to 1994, to close out the 20th century.

It records Ghana marking world championship glory in 2007 when Joseph Agbeko took down Luis Alberto Perez to wear the crown as the new IBF bantamweight King.

That conquest provided fodder for Joshua Clottey’s conquest of his more famous opponent, Zab Judah, leading to a recourse to the cards, establishing the Ghanaian “Hitter” as the glorious new ruler of the IBF welterweights in 2008.

It took a while, yet Emmanuel Tagoe showed he’s got game when he almost killed South African Mzonke Fana to take the International Boxing Organization lightweight title at the Bukom Arena, in December 2016.

Compatriot Richard Commey could not be denied his due, when, after successive heartbreaking losses to Robert Easter, Jr and Denis Shafikov, he took it out on hapless Russian opponent, Isa Chaniev, whom he stopped in only two rounds of explosive action in Dallas, in February 2019.

As DK himself refrains that “I’m proud I laid a great foundation. Now, we have more World Champions after I won, more than some countries that had World Champions before us”, his conquest of the world has reinforced the Ga people as great warriors, and established Ghana as the destination of Champions.

That is the legacy of the immortals of the sport in Ghana preserved by the book touted by President Nana Addo Dankwa Akufo-Addo, a known orator, as “a great work” focusing on the achievements and well-being of the men of steel who have used the four ropes as their bolthole to hone their significance in life.