When will Neymar grow up?

“Ido not punish him for pleasure; I do it because it is necessary,” insisted Santos’s coach, Dorival Junior. It was September 2010 and an 18-year-old Neymar had been banished from the first team and fined a third of his month’s wages after throwing a tantrum when he was not allowed to take a penalty during a match against Atlético Goianiense.

Twenty-four hours later Dorival was packing his bags after the Santos board opted to side with their teenage prodigy rather than the man who had just led their team to a thrilling victory in the Campeonato Paulista, winning 65% of his matches. The message was clear: Neymar is most important.

It is a theme that has continued throughout the Brazilian’s gilded career. From the almighty tussle between Barcelona and Real Madrid in the race to sign him the following year to his penalty spat with Edinson Cavani at Paris Saint-Germain, Neymar’s wishes have always been indulged. But has he finally gone too far? 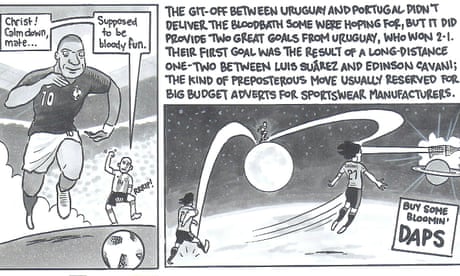 “Neymar has charmed Brazil but annoyed the whole world,” assessed Globo newspaper the morning after the 2-0 victory over Mexico which confirmed the Seleção’s place in the quarter-finals for a seventh World Cup in succession. Globo featured a picture of their No 10 in agony after Miguel Layún appeared to stamp deliberately on his ankle but sympathy has been in short supply for a player who, despite his undoubted ability, divides opinion.

“He is still lacking something but he is a star,” was the analysis of Diego Maradona, who knows a thing or two about dealing with pressure at World Cups. “Neymar has to change the ‘chip’ in his head a little bit.”

“He is more concerned about being on the floor,” sneered Layún after the match. “If he wants to lie down, he should go home and sleep. We know Neymar and he likes to be the protagonist on and off the field. It’s obvious. Anyone who has seen the game knows exactly what I’m referring to. He’s like that. His personality is like that.”

To most people watching, that assessment – regardless that it came from an opponent who seemed dedicated to ensuring Brazil’s star player never had a moment’s peace – is fair. Even in Brazil the general perception of Neymar as the kid who always gets what he wants is getting harder to shift by the day, with Juca Kfouri, a respected football commentator, having accused him of “Peter Pan syndrome” in his column for UOL after the very public show of tears at full-time of the victory against Costa Rica. 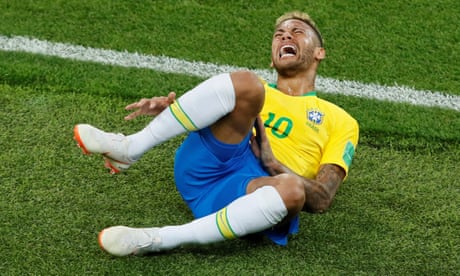 Neymar hits out at campaign ‘to undermine’ him after acting accusations

“If Neymar wants to be the number one in the world, he needs to change his gaze,” he wrote. “Stop seeing yourself in the mirror and aim at Cristiano Ronaldo. When the Portuguese lived on the big screen, it did not happen. After that he started looking at himself.”

And therein lies the real problem with Neymar. His life has been so carefully stage-managed by his father and assorted agents that the singular goal of becoming the best player in the world has dominated his approach – often to the detriment of the team.

Yet that was not always the case. At the 2012 Olympics in London and with pressure on Brazil to deliver victory in a tournament they had never won before, Neymar showed none of the signs of stress that appear to afflict him these days. Up until the surprise defeat by Mexico in the final at Wembley, he would always be the last out of the changing room and seemed to relish the attention as he signed autographs for the throng of fans waiting outside.

Pressure, however, can do strange things to people and the decline in Neymar’s relationship with the media since that tournament has entered new territory since he left Barcelona for a world record €222m last year. Most of his interaction with the public now occurs through the medium of social media, with estimates that he earns around €400,000 from every post he makes on Instagram to his 98m followers. “I’m moved by happiness and challenges,” reads his bio, in his English first and then Portuguese – another nod to his global outlook.

Nonetheless, a player whose lawyers negotiated separate image rights in the deal that took him to PSG will certainly have taken note of the widespread criticism that has come his way. Neymar showed glimpses of his best form in the win over Mexico, taking his tally in Russia to two goals and one assist. Given that it is only 16 weeks since he fractured the fifth metatarsal of his right foot playing against Marseille, he will be happy with a return which means he now has six goals from his nine World Cup appearances in total.

Amid all the tumult that followed the 7-1 defeat by Germany on home soil four years ago, it is often forgotten that their talisman was watching on helplessly from the stands after being injured in the quarter-final victory over Colombia. But after helping to banish some of that negativity by scoring the winning penalty in the shootout against Germany to end Brazil’s Olympic curse in 2016, Neymar will know the only way to silence his expanding army of critics is to let his feet do the talking.