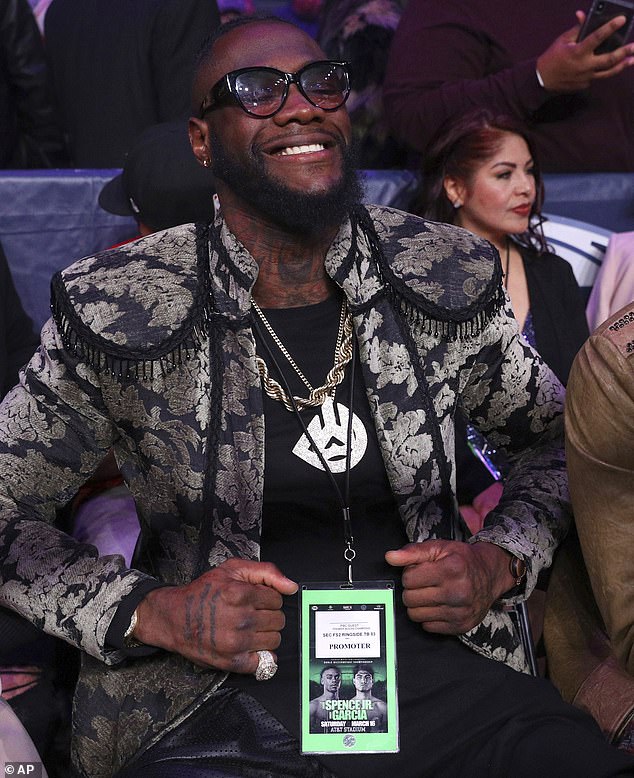 Deontay Wilder and Floyd Mayweather were among a number of superstars in Texas on Saturday night as Errol Spence Jr dominated Mikey Garcia in their blockbuster welterweight showdown.

Super fights lay on the horizon for Spence now after he claimed a wide points decision against the ambitious yet limited Garcia to retain his IBF world title and he immediately called out Mayweather’s former foe, Manny Pacquiao, after the fight. 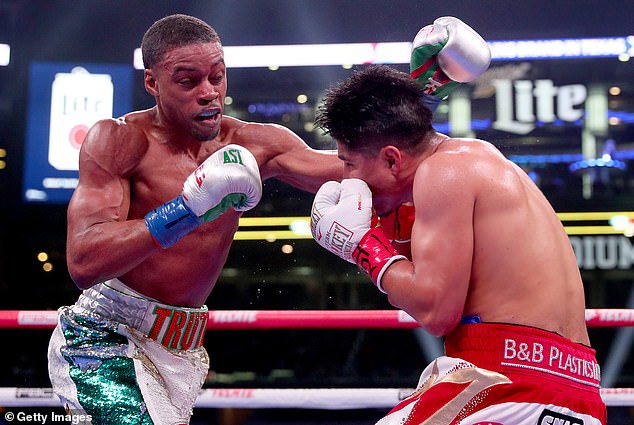 Mayweather and Wilder were both in the building and were seen ringside for the stacked event at the AT&T Stadium.

Wilder, who wore an eccentric blazer on Saturday night, was seen in the ring conversing with Dallas Cowboys owner Jerry Jones before taking his seat ringside ahead of the main event.

The WBC heavyweight world champion is yet to clarify his next move after rematch talks with Tyson Fury broke down last month but appeared to be unconcerned about his future as he was pictured smiling in his VIP seat.

Wilder has been ordered to make a mandatory defence of his WBC title against compatriot Dominic Breazeale next but nothing has been finalised. 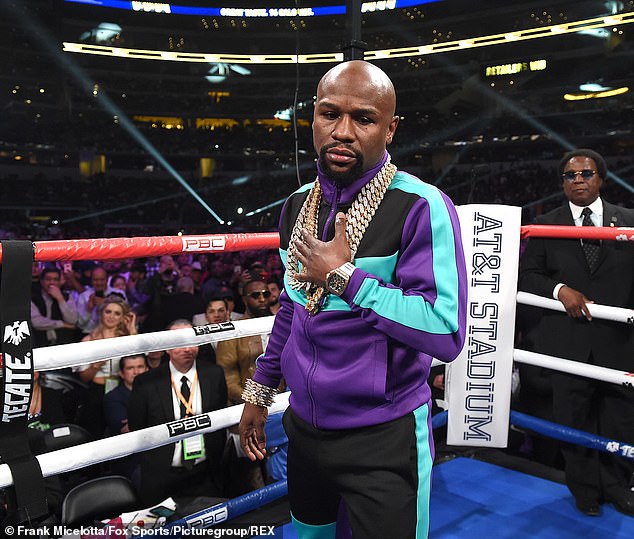 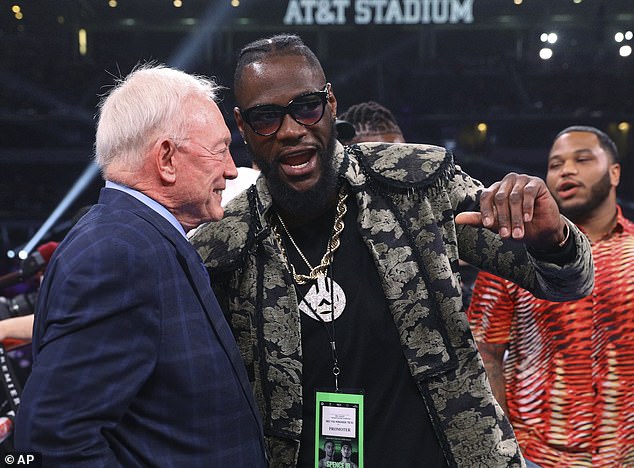 As Sportsmail reported this week, the chances of Wilder facing Anthony Joshua in a fight for the undisputed championship are fading with the American heavyweight set to decline a lucrative offer from streaming service DAZN. 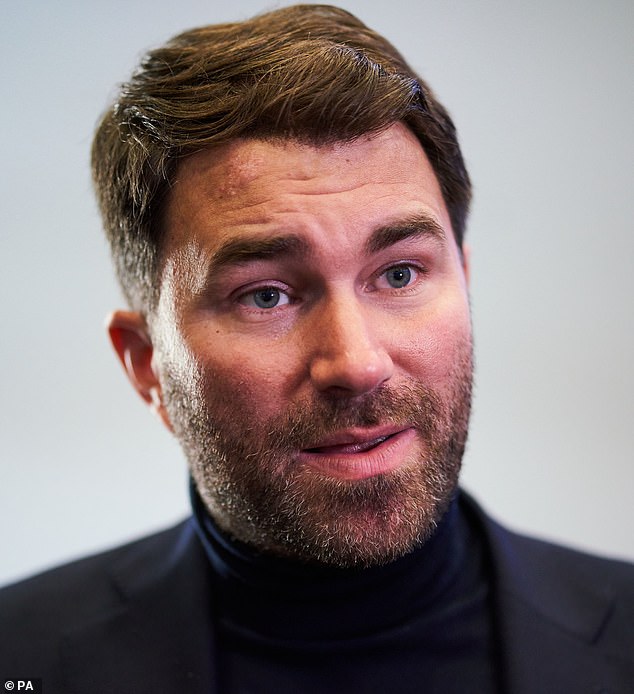 Joshua’s promoter Eddie Hearn insisted the picture will become clearer next week but does not appear to be optimistic about making the fight happen this year after claiming he has done all he can.

He told Sky Sports: ‘Well, I am not going to say much until I know for sure. I’ll have a lot to say on Tuesday.

‘I feel like we’ve done absolutely all we can. But again, I think less is more at this stage. Our job is to deliver the undisputed fight.

‘It’s been frustrating and I think people are beginning to see the truth. But again, I’ll be quiet for now and let that truth unfold.’ 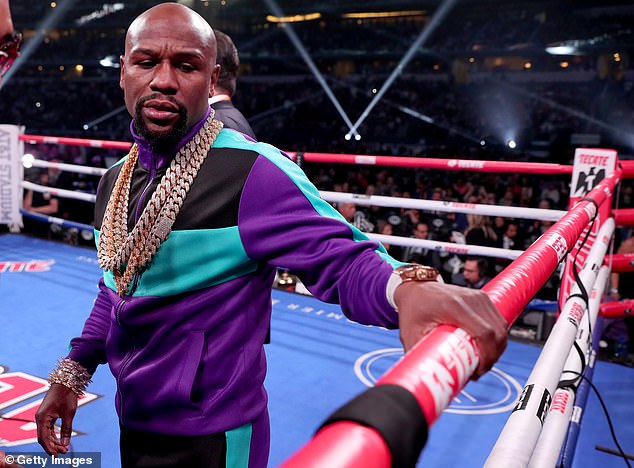 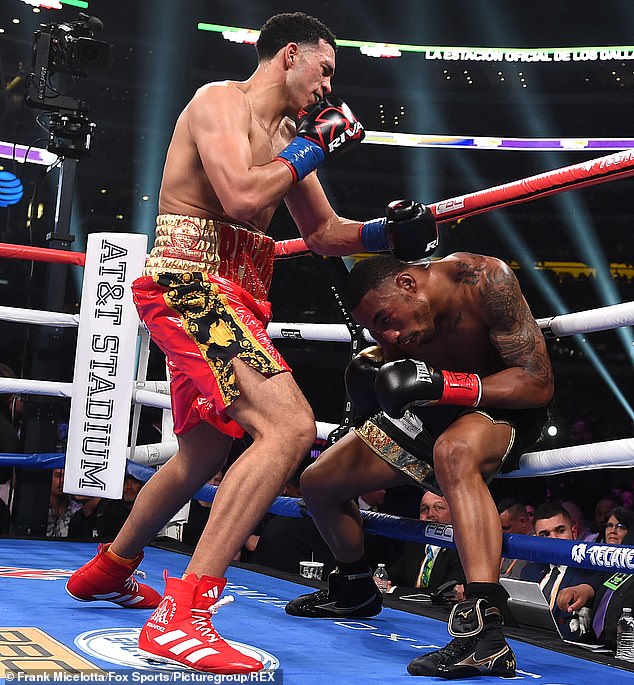 Mayweather, meanwhile, was there strictly on business with one of the fighters he promotes, J’Leon Love, fighting on the undercard of Saturday’s show.

The Moneyman, who was pictured in the ring draped in gold, watched his man Love get stopped in the second round by David Benavidez – who was making his first appearance in the ring since being stripped of his WBC world title following a positive test for cocaine back in September – before enjoying the main fight.

Benavidez has proved to be a thorn in Mayweather’s side, beating three of his promoted fighters in his last three outings, claiming back-to-back wins over Ronald Gavril before Saturday’s victory.