Deontay Wilder has announced that he will have a rematch with Luis Ortiz next, leaving Anthony Joshua and Tyson Fury in the wilderness once again.

The Bronze Bomber, the WBC champion, had been heavily linked to either a mammoth unification fight with Joshua or a rematch with Fury next but both of those fights now seem to be delayed again.

Wilder got the better of Ortiz with a 10th-round knockout in March 2018 and will now go toe-to-toe with the Cuban again.

To all my fans,
I want to announce that Luis Ortiz and I have signed for a rematch, with the date and site to be announced shortly.
All my controversial fights
Must get dealt with ASAP

A date and venue have not been confirmed but reports indicate September 7 or 28 in either Los Angeles or Las Vegas could be possibilities.

Joshua, the unbeaten WBA, IBF and WBO heavyweight champion, has failed to agree terms with Wilder on several occasions, delaying a fight between the division’s two superstars.

He makes his US debut on Saturday night when he takes on Andy Ruiz at Madison Square Garden. He is expected to come through that fight unscathed and then there will once again be a battle to secure terms with his next opponent.

Wilder defended his WBC heavyweight title with a routine first round knockout win over Dominic Breazeale in Brooklyn earlier this month and Joshua still has his sights set on stealing that elusive belt. 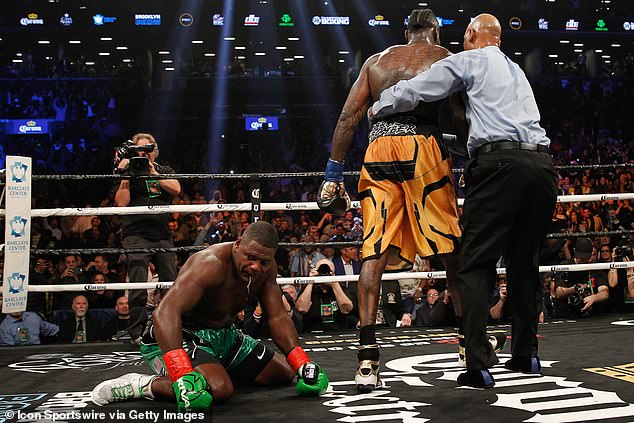 ‘I don’t want this to be a Lennox [Lewis] and [Riddick] Bowe situation, I definitely don’t.

‘The heavyweight division is so lit right now, it’s on fire right now. I think it is our obligation, our duty to give the fans what they want.’

Fury is currently in training ahead of his clash with unheralded German Tom Schwarz on June 15.

Wilder and Fury fought to a thrilling and controversial draw when contesting the American’s WBC title in Los Angeles in December and it was a surprise that an immediate rematch was not announced.