The International Cricket Council has announced an unprecedented increase in funding and coverage for the Women’s World Cup 2017 – to be held in England and Wales – in what it hopes will be a “watershed” moment for the women’s game.

Prize money for the tournament has increased to $2m, double last year’s figure, and a huge increase on 2013’s figure of just $200,000. Fans around the world will also be able to watch every ball of every game for the first time in the history of the sport.

This year’s World Cup features defending champion Australia, England, India, New Zealand, Pakistan, South Africa, Sri Lanka and the West Indies. The final will be held on 23 July at Lord’s and will deploy Spidercam for the first time in the women’s game, as well as at The Home of Cricket.

The set of announcements come as part of the ICC Board’s unanimous decision to accelerate the global development of women’s cricket, committing to parity across men and women’s cricket within 15 years. In line with this promise, the ICC will later this year launch a blueprint for the growth and sustainability of the sport.

“We think the Women’s World Cup this summer will be a turning point in the history of the game. There is growing interest globally in women’s sports and we want cricket to be front and centre of this and lead by example.

“The change will not happen overnight but the women’s game is crucial to the global growth of cricket. There is undoubtedly an audience for it – there were almost 18 million views of highlights of the Women’s World Cup Qualifier earlier this year. There is greater depth in the women’s game and that is leading to increased competitiveness which is what fans want to see.”

Jones welcomed the changes, telling the Guardian that the ICC announcements were a “game-changer” for cricket. 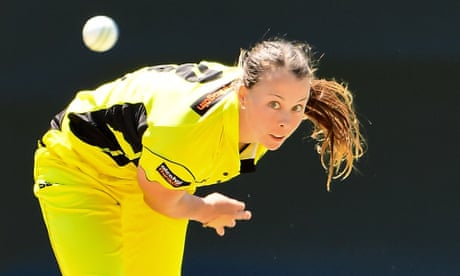 “The combination of TV and Live streaming, as we have seen in Australia with the success of the Women’s Big Bash League (WBBL), could be one of the biggest game-changers for cricket.

“This will hopefully give rise to a ground swell in women’s sport in other countries that we are seeing in Australia,” she said.

“Having nervously given up my job to go full time commentary in November last year these developments also mean greater opportunities for females right across the board.

“Every World Cup wants to leave a legacy. These developments mean that this World Cup can impact not just the home nation but all nations playing and hopefully create healthy competition between sports to continue to lift the bar when it comes to parity in sport.”

The ICC announcement follows continued pay negotiations between Australian cricketers and Cricket Australia. Cricket Australia (CA) are looking to do away with the two decade-old fixed revenue-sharing model, and offered the players $419m over five years instead, a deal which was rejected by the Australian Cricketers’ Association (ACA). CA is framing the new deal as driven by “gender equality”, with women being offered 150% increases in their salary in the new deal. However, the players’ union said the changes were disrespectful as it “denies female cricketers the opportunity to share in the game’s revenue”.

Australian cricketers have so far insisted that they will ride the “ups and downs” of the revenue sharing model, despite estimates that the current broadcast deal is costing Channel Nine $30-40m per year. The deal expires after the 2017-18 summer.