Work ethic behind Murray’s rise to No. 1

Andy Murray has worked so hard to reach the top of his sport  which he marked emphatically by beating Novak Djokovic in straight sets on Sunday  that he intends to stay there for as long as he can. There is every chance he will still be No1 in the world when he returns to defend his Wimbledon title next June and he may even be Sir Andy by then.

“When I was always fourth in the world, I never liked losing,” he said in the small hours after his 6-3, 6-4 win in an hour an 43 minutes at the O2 Arena to win his first ATP World Tour Finals and retain the world No1 ranking he took from Djokovic in Paris a fortnight ago. “But it didn’t have the same kind of impact because I wasn’t No1 and I wasn’t like holding on to something. Fourth place in the world is still great but it isn’t No1.

“Maybe now, especially the last few months when I have had that goal there and have been trying to get there, I want to stay there. I don’t feel too high just now, I feel good – and I feel motivated to keep going. I have enjoyed the last five, six months the most I have in all of my career. That is probably because I have won a lot, so I want to keep going.”

Murray’s love of boxing is not a passing whimsy. He recognises the similarities with tennis and he was especially tuned into Andre Ward’s points win over the awesome Russian Sergey Kovalev to win the world light-heavyweight title at the weekend, a victory the American put together systematically rather than spectacularly, after being down in the second round.

“I watched the fight this morning. A lot of times when you watch a fight and then read what they say afterwards, the person that you think has done the most damage, you think that might win you the fight, but it doesn’t. Everything gets reset after each round.”

A bit like tennis, then – and a bit like his own career? “Yeah, I guess it is. Ward definitely won the second half of that fight and Kovalev definitely won the first part of the fight. A lot of the rounds, the fourth, fifth, sixth, were pretty close and you could see maybe the scoring going either way. Kovalev did more damage, so people think he was robbed but I think it was pretty close. It was bloody close I think.”

For Ward, read Murray, coming from behind to be No1 in the world; for Kovalev, read Djokovic, letting an early advantage slip.

After 11 years on Tour Murray is reaping the richest dividend on his investment of hard work, sacrifice and commitment. Those qualities might not be as glamorous as pure talent but all champions have them. If Murray stays fit and enthusiastic, he is perfectly placed to add to his three majors, given Djokovic’s new vulnerability and the gap to the next tier of contenders.

Roger Federer, at 35 and out of the game with knee and back problems since late July, and 30-year-old Rafael Nadal, cut down by a wrist injury at Roland Garros that forced him to miss Wimbledon and coming off his poorest season in a decade, have a lot of work to do to re-establish themselves as frontline challengers. The odds are against them. They have taken substantial ranking hits, Federer out of the top 10 for the first time in 14 years, down at 16, and Nadal slipping to ninth.

Of the new intake at the top, Dominic Thiem did not show his best in London last week but will surely make an impact soon, as will the ever-volatile Nick Kyrgios, the increasingly impressive Milos Raonic and the winner of three majors Stan Wawrinka, whose power and strength invariably illuminate the big tournaments but who admitted last week he is slowing down.

Only Djokovic is a realistic challenger to Murray’s No1 ranking but there is a definite sense his iron will is not what it was – although he is still an extraordinary player and will probably close the two-title gap on Nadal’s 14 majors and perhaps overtake Federer’s 17. Yet his aura has dimmed. He may soon question his passion – or he may be revitalised by the challenge. Five months ago he led Murray by more than 8,000 ranking points. Now he has the task of defending the points he gathered like berries on a bush at the start of 2016, a year that promised much but finished in disappointment and maybe a little concern.

Murray begins his reign in earnest after only the briefest rest, at the Australian Open in Melbourne, from 16 January. For the first time he will probably start as favourite. Ivan Lendl, the chief architect of Murray’s rise, along with his full-time coach Jamie Delgado, did not expect him to reach the top of the rankings until February or March but that scenario has changed dramatically in the space of three months, in which Murray has won five titles in a row and is unbeaten in 24 matches. 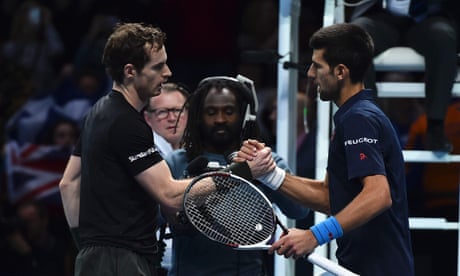 Andy Murray humble in victory against a magnanimous Novak Djokovic

The ATP’s shrewd Australian analyst, Craig O’Shannessy, has spotted a key reason Murray has been winning so often. “A major component of Murray’s ascendancy to world No1 this season is his substantial improvement on second serve,” O’Shannessy says. “At the 2015 Australian Open Murray’s average second-serve speed in his opening round against Yuki Bhambri was a pedestrian 85mph. In his 2016 first-round match in Melbourne against Alexander Zverev his second-serve speed averaged 93mph, with the fastest at 108mph.

If those numbers do not sound spectacular, they have to be factored in to his all-round game. Even when his serve comes under quality pressure, he has an uncanny capacity to make the most of an unpromising situation, to the point where he frustrates players with the sheer stickability of his tennis.

Murray is the patron saint of lost causes, most spectacularly when he has to chase deep and wide. Countless times he keeps a rally alive with that surreal, wrist-flicked backhand lob on the run that seems to laser in from a great height to within inches of the baseline at the other end. This consistent skill not only sows doubt about coming into the net but it gives Murray time to get in a better defensive position on the next shot, and reset the exchange.

So two unspectacular but vital components of his game underpin his week-in, week-out ability to beat less consistent players. They complete the picture of his mantra about hard work. When Murray is sweating for hours at his Miami training base, or fine-tuning his game in lesser tournaments before the first slam of the season, it is these and many other skills he hones in preparation for the 11 months to follow.