One of the endearing things about Manchester City, even in their present incarnation as global-scale wealth squanderers, is that every few years a player comes along whose bond with the supporters transcends the normal relationship between well-rewarded professionals and the paying audience.

Pablo Zabaleta, who is leaving the club after nine years, is the latest in a series of terrace heroes that includes Colin Bell, Georgi Kinkladze, Uwe Rösler and perhaps even Shaun Goater. Not all of those players made the same impact, and maybe the expression ‘club legend’ fits some better than others, but what they all had in common was an instant and easy affinity with the crowd. Like the supporters, they “got” City, understood what the club were all about and performed as if being asked to run out at Maine Road or the Etihad was an honour and a privilege rather than a weekly duty. 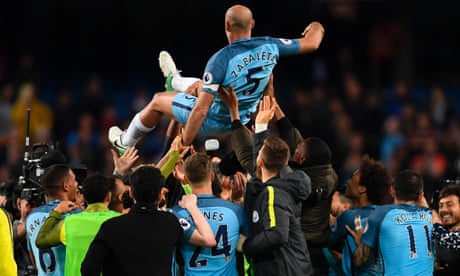 The Argentinian full-back has been arguably one of the Premier League’s most consistently feisty competitors during his time in England, not just splendidly reliable at chugging up and down City’s right flank but one could tell from his parting remarks after his final home appearance against West Bromwich Albion that he knew which buttons to press. “My favourite moments were when we beat Manchester United in the semi-final at Wembley,” he said on the pitch. “And the first Premier League we won with Sergio Agüero’s goal. The fans had waited so long and we did it in a City way.”

Earlier Zabaleta had even managed to apologise for sticking around so long. “It was a dream come true for me to come to the Premier League,” he said. “I said to my girlfriend, now my wife: ‘Let me go to Manchester, I will enjoy it and it will only be for three or four years.’ So I have to say sorry, it has been nine years.”

Zabaleta has given the impression of enjoying every minute of it. His whole-hearted performances made him a favourite almost from the word go, before he was joined by other illustrious names, because when Zabaleta arrived at the club from Espanyol – rejecting an offer from Juventus in favour of following his dream of playing in England – he was the last signing of the old, discredited, Thaksin Shinawatra regime. When Zabaleta turned up in Manchester Mark Hughes had just taken over from Sven-Goran Eriksson as manager and Shinawatra was in the process of selling the club to the present owners, the Abu Dhabi United Group, whose takeover would be announced a few days later.

When Zabaleta made his City debut in a 3-1 defeat by Luiz Felipe Scolari’s Chelsea in September 2008, only Vincent Kompany of the present side was on the teamsheet. Stephen Ireland, Michael Ball, Daniel Sturridge and Didi Hamann were among his team-mates, and the City goal was scored by Robinho, one of several flashy City signings of the time who gained plenty of media attention but did not last long.

Chelsea, with their Brazilian manager, had been trying to buy the Real Madrid striker themselves, but on the deadline day on which Dimitar Berbatov joined Manchester United from Spurs, City set a transfer record by paying £32.5m for a player who would appear for them only 41 times in an 18-month stay.

Zabaleta and Robinho made their City debuts on the same day, though that is about all the pair have in common. Zabaleta was pleased to be coming to Manchester and said so, never managed to confuse his new club with Chelsea in a recorded interview and, more than 330 appearances and a full set of domestic prizes later, he leaves with the best wishes of everyone in and around his adopted city.

The player’s unhesitating commitment has sometimes led him into trouble – in taking one for the team at Wembley in 2013 and fouling Wigan’s exasperatingly skilful Callum McManaman the City defender became only the third player to be sent off in an FA Cup final – but though his reactions have slowed a little in recent years and his crossing could still be improved Zabaleta will leave a large hole in City’s ranks.

Pep Guardiola doubtless has his eye on a quicker and even more attacking replacement but City will struggle to find a player as simpatico with the club. “I’m in a very good team so I didn’t think twice,” he said on agreeing one contract extension. “I gave a quick answer because I was so happy to sign.”

Zabaleta has always been good at fulfilling his off-field duties too. His eloquence after his last home match came as no surprise to reporters who have often found him the only member of the side willing to speak, even in the early years when he was still coming to grips with a new language. While modern footballers tend to resort to headphones or pretend phone calls to avoid post-match interviews, Zabaleta has always been happy to talk. He sees things like a fan and does not take success for granted. It was apt that City presented him with a lifelong season ticket as a parting gift; here is a player who probably intends to use it.